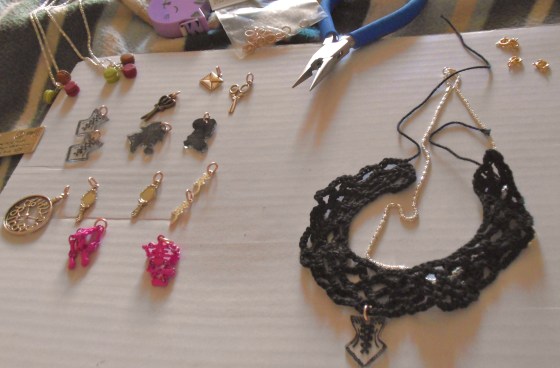 So this week, as well as crocheting like a mad woman as per, I have been necklace making.

I have gathered various charms through magazines, cheeky finds, making cheeky shrink plastic efforts and my wonderful pal Cia has donated me a whole bunch of funky earings she no longer used.

The result has been a salvaged, recycled, crafty kinda week.

The results will be going up for sale online via my etsy store, I will blog when they are up this Sunday =D

This week I took a trip to the Art Store this week and invested in lots and lots of beads and thread.

I’ve been dabbling in the childhood craft of freindship bracelets after seeing some selling for over £5 in urban outfitters and downright refusing to pay the pricetag. At first I just braided for simple bracelets, pushing beads on every 10 repatitions or so. Before long I was trying more complex patterns and found a whole bunch of free patterns on http://friendship-bracelets.net/ which are really easy to follow. Knotting over and over is really calming.

I’m most proud of my cat bracelet. The bead is a ceramic shaped cat 50p from the art store. Thick cotton (35p a metre) is a nice alternative to leather, which when damp tends to smell a bit which with weather in Scotland is a real concern. :p. The pattern could not be easier (click for larger images):

repeat over and over. If you like, add a bead onto one thread instead of making the knot, continue the pattern as before.

I loved my previous box craft so much (see post on my earring chocolate box) that when I acquired a handy shoe box with my new walking boots my mind put two and two together.

After dealing with the mass of earring that I own I decided it was a good idea to tackle the mass of necklaces, rings and bracelets that I own… and trust me this is the thinned out version!

I used egg box carton lid and insides as separators so I can easily lift out compartments to have a good old root around. Each bracelet can have a separate egg cup and so on. Everything looks so organised its easy to select what I want to wear.

The box itself had a quick lick of paint, white emulsion mixed with a purple colourant, and was left to try overnight. I’m just lazy but the box should ideally have 2 coats to make it even and cover any labeling.

I used a mixture of buttons and beading for the top, spares of this and that spread around the top of the box before labeling it ‘treasures’. I love using the foamy bit from inside chocolate boxes to raise up labels. I think it looks p. nifty.

And so there, my gems are hidden in a treasure shoe box. =D

I'm die hard crafter and blogger. I've been blogging since 2012 about the crafty things I get up to on a weekly basis. I crochet lots, play with fabric, glue and provide hints and tips I've found through my time in the crafting world. Thanks for swinging by

Looking for Something Special?

All Source material not made by ThreadCetera has been credited and full links to original sources given.